Hi, what are you looking for?
By
Published
Michigan DUI accident lawyer Paul J. Tafelski releases a new article (https://www.michigandefenselaw.com/mi-owi-dui-lawyer/drunk-driving-accident-attorney/) explaining what an accident DUI is in the state of Michigan. The lawyer mentions that DUI is taken very seriously in Michigan. If a person is involved in a DUI accident, it’s not usually that they are pulled over by police. Law enforcement may be called to the scene of the accident instead.
“An accident drunk driving case occurs following an investigation of the accident scene. Sometimes the driver only injures him or herself. However, an accident DUI may involve catastrophic injuries or even death to someone else. In serious cases involving death or catastrophic injury, it is often important to seek defense around fault for the accident or causation factors,” says the Michigan DUI accident lawyer. 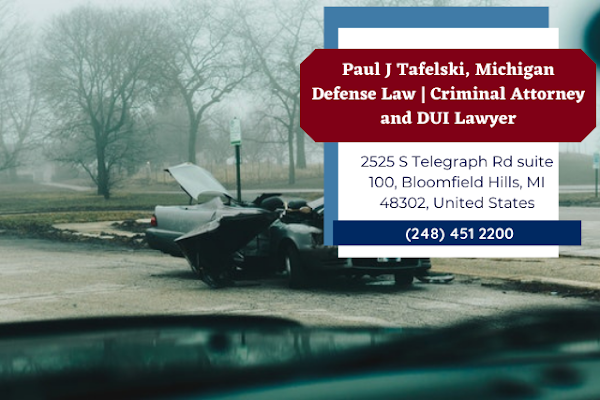 According to the lawyer, if someone is under the influence and causes a car accident they could face severe penalties or even jail time. The offense of operating while intoxicated and causing serious injury is one example where the accused can face jail time. The penalty for this offense can be up to 5 years imprisonment and $1000-$5000 in fines.
Attorney Paul J. Tafelski states that for the death of a person in an accident, there is a maximum penalty of 15 years imprisonment and a $2500-$10,000 fine. A DUI lawyer should be consulted if a person is facing criminal charges. Even small details can have a huge impact on how the outcome of the case is determined.
Attorney Tafelski explains that drunk driving can lead to the defendant fleeing the scene in many cases. Fear, shock, injury, or even an attempt to escape being arrested can all lead to this. According to the lawyer, it’s important that an accused does not give any statements to police officers without consulting a lawyer.
According to the DUI lawyer, “You should not lose heart and assume that a conviction will occur simply because there was an accident associated with your DUI. There are various strategies that we may be able to employ to defend you. For instance, in some cases, the cause of the accident, meaning who was at fault, can be contested. Even if a person was guilty of drunk driving, they may not be guilty of the more serious offenses related to injury or death if the cause of the accident or injury can be effectively challenged.”
Lastly, the lawyer emphasizes the importance of having a skilled lawyer when facing charges of DUI. An experienced lawyer may be able to help the defendant understand their rights and protect their freedom.
About Michigan Defense Law
Michigan Defense Law is a firm that takes the presumption of innocence very seriously. Every client deserves competent legal representation. No matter if someone is facing a felony or misdemeanor charge, the lawyers at Michigan Defense Law will work hard to vigorously defend the client and achieve the best outcome for them. Call Michigan Defense Law today at (248) 451 2200 to schedule a consultation.
Paul J Tafelski, Michigan Defense Law | Criminal Attorney and DUI Lawyer
2525 S Telegraph Rd suite 100, Bloomfield Hills, MI 48302, United States

Press Advantage is a Full-Service Press Release distribution service. Learn more at PressAdvantage.com
Few will lose as much as journalists if Twitter dies, having grown reliant on its endless sources and instant updates.
Researchers has cracked a five century-old code which reveals a rumoured French plot to kill the Holy Roman Emperor.
The ransomware attack on AirAsia serves as a sobering reminder of the growing threat to critical infrastructure globally.
EU energy ministers are discussing a proposal to set a cap on gas prices at 275 euros per megawatt hour – Copyright AFP/File Charly…
COPYRIGHT © 1998 – 2022 DIGITAL JOURNAL INC. Sitemaps: XML / News . Digital Journal is not responsible for the content of external sites. Read more about our external linking.

Spread the loveHi, what are you looking for?ByPublishedCyclists are particularly vulnerable on British roads, especially in areas that do not have marked outcycle lanes, Our analysis has shown the areas where cycling accidents are most common,Birmingham, United Kingdom – February 9, 2022 — ClaimToday has released a new report for cyclists in London also covering…